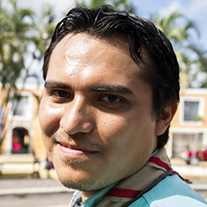 On the northern edge of the Plaza Grande, diagonal to the city cathedral, is the Palacio del Gobierno. Built in 1892, the key-lime-colored mansion should be among the first stops during a visit to Mérida. 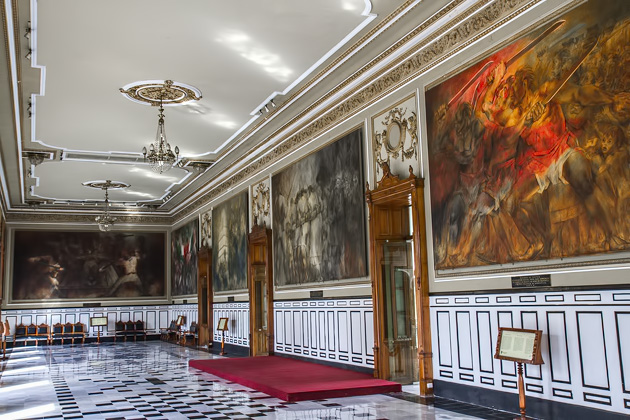 What makes the Palacio del Gobierno so special, and of particular interest to Yucatán newcomers, is the Salón de la Historia on the second floor. Here, Mérida-born painter Fernando Castro Pacheco has brought the history of the Yucatán to life in a vibrant series of murals.

From the Spanish conquest and the horrendous 1526 bonfire of Maya culture under the auspices of Bishop Diego Landa, to the henequen boom and the selling of local Maya to Cuban slavers, Pacheco has captured the pivotal moments of his region’s history in an unflinching and beautiful manner. Each of the giant murals has a descriptive panel (in Spanish, English and Mayan), and they’re all engrossing. Despite its just being a single room, I spent more time here than in many museums.

My favorite was Pacheco’s interpretation of Maya legend on the stairwell, which stretches across three murals. In the middle is the birth of man, which the ancient Maya believed happened through a stalk of corn. Toward the west, the setting sun provides cover of darkness for the gods of war and jaguar. And in the east, the rising sun shines its light on the glorious culture and learning of the Maya.

The Palacio del Gobierno is free to visit, and found in the center of the city. Considering the throngs outside in the Plaza Grande, we were astounded to be all alone in the salon. If you have any interest at all in Yucatecan history or great art, don’t pass it up. Pacheco, who died in August, 2013 at the age of 95, has put together a powerful and glorious tribute to his land. 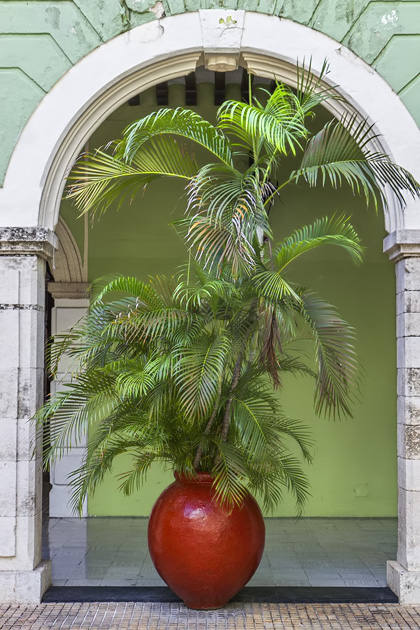 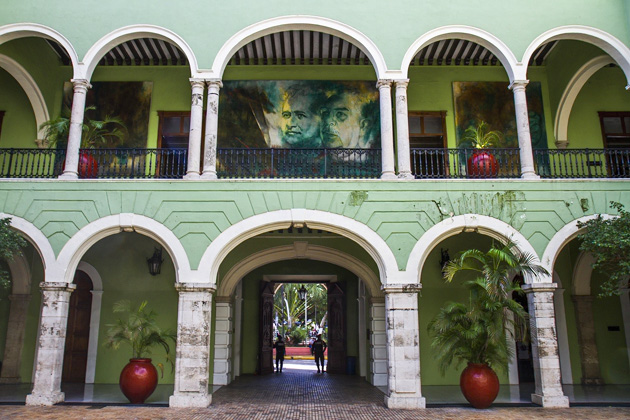 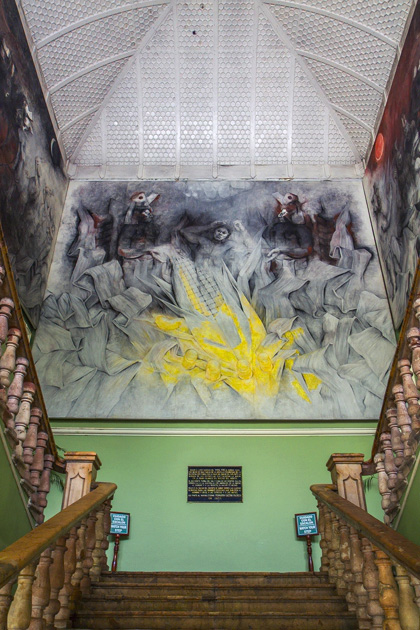 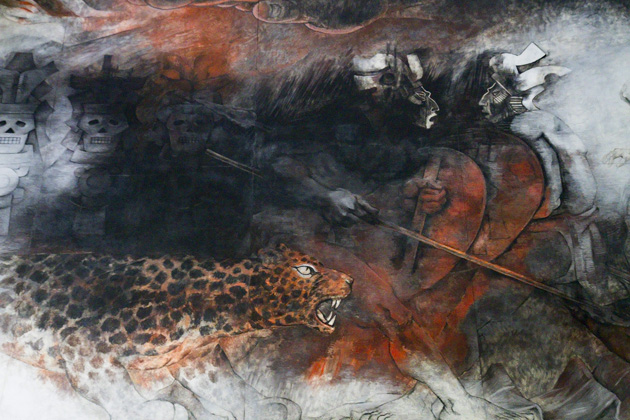 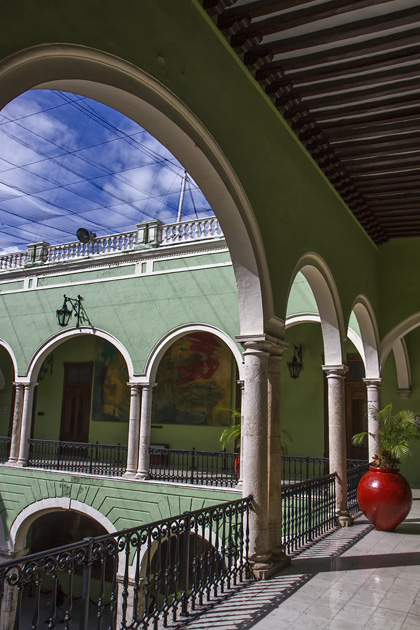 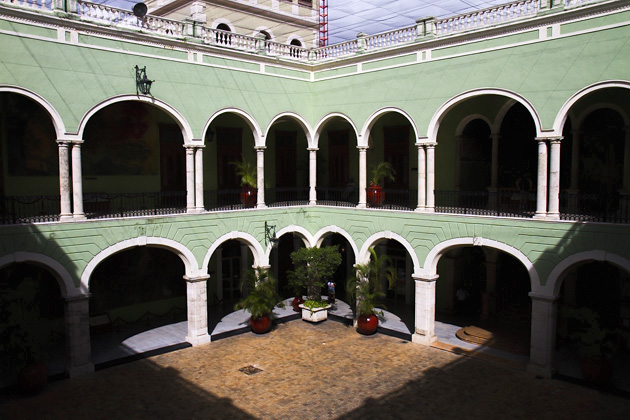 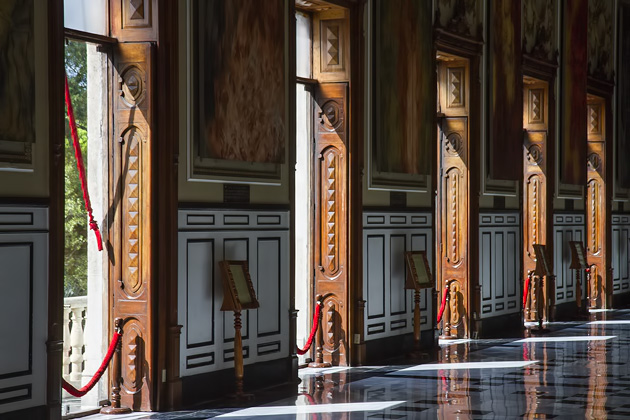 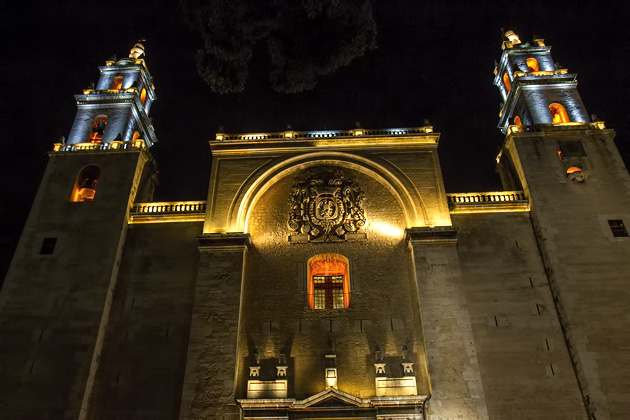 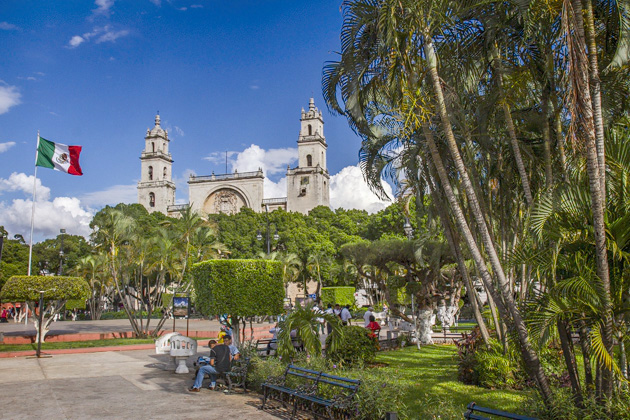 January 29, 2014
El Palacio del Gobierno in Mérida On the northern edge of the Plaza Grande, diagonal to the city cathedral, is the Palacio del Gobierno. Built in 1892, the key-lime-colored mansion should be among the first stops during a visit to Mérida.
Michael Powell
For 91 Days